HERE
Posted by the wizard at 8:15 AM No comments:

HERE
Posted by the wizard at 4:30 AM No comments: 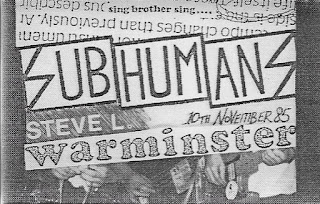 This was the "262nd and Final Gig" before SUBHUMANS split (they've likely played three times that number since reforming for good in 1998). A loose and fiery set that features "From The Cradle To The Grave" and sounds every bit as important and relevant as it did 34 years ago.

HERE
Posted by the wizard at 6:30 AM No comments:

This is how music was shared, and this is how a subculture grew from the ground up. A network of co-conspirators, held together by the music. Then we had cassettes (we still have tapes now, of course), but now we have the internet. Like TERMINAL ESCAPE, all of these posts come from cassettes and all were transferred in-house, but this blog is just for live recordings. Devoted collectors, traders, compilers and caretakers are the reason we have access to these sounds decades later...
Lots of dead links. No, I will not fix them. I mean, maybe I will, but probably not. I have a lot of tapes to rip instead.

the wizard
I am responsible for all of this.